Clotrimazole is an imidazole antifungal with antimicrobial activity similar to that of Ketoconazole.

Clotrimazole has a broad spectrum of activity (yeasts, dermatophytes and a number of other fungi). It is effective on yeast notably Candida albicans and Torulopsis glabrata as well as on Trichomonas vaginalis and some gram positive and gram negative bacteria (streptococci, staphylococci,Gardneralla vaginalis, Bacteroides).

Clindamycin is a lincosamide antibiotic with a primarily bacteriostatic action against Gram positive aerobes and a wide range of anaerobic bacteria.

Clindamycin is effective in the treatment of infection caused by susceptible anaerobic bacteria or susceptible strains of gram positive aerobic bacteria. It has been shown to have in-vitro activity against the following organisms which are associated with bacteria vaginosis Cardneralla vaginalis:-

The concentration of unchanged active substance in the plasma of volunteers following the application of 2% Clotrimazole vaginal cream was below the limit of detection (10mg/ml). Since only very small amounts of active substance are absorbed by the vaginal skin and it is metabolized very quickly (t1/2 = 1-2 hours), concentrations in the blood plasma are always below the limit of detection.

Following once a day dosing of 100mg of vaginally administered Clindamycin phosphate at a concentration equivalent to 20mg of clindamycin levels average 20 nanograms/ml (range 3 – 93 nanogram/ml in normal volunteers. Approximately 3% per gram of cream peak serum Clindamycin  (range 0.1 – 7%) of the administered dose is absorbed systematically.

In women with bacterial vaginosis, the amount of Clindamycin absorbed following vaginal administration of 100mg of the cream (20mg/g) is 4% (range 0.8 – 8%) which is approximately the same as in normal women.

When the tablet is inserted, Clotrimazole penetrates the epidermis but there is little if any systemic absorption. Absorption of 3 to 10% of a dose has been reported following vaginal administration. Clotrimazole is metabolized in the liver to inactive compounds and excreted in the faeces and urine. Small amounts of clindamycin may be absorbed after the application of the tablets: bioavailability from topical preparation of the hydrochloride and phosphate (the former in an extemporaneous, formulation) has been reported to be about 7.5% and 2% respectively. About 5% of an intravaginal dose may be absorbed systemically.

History of hypersensitivity to Clindamycin or Clotrimazole or any of the components of the preparation.

Mycoten®-Plus vaginal cream contains oil base components. Some of these have been known to  weaken rubber of condoms and diaphragms and make them less effective as a barrier method of Contraception or as a protection. Patients should be advised from sexually transmitted disease including AIDS patients should be advised to use alternative precautions of contraceptives at least five days after using the product. Cross resistance has been demonstrated between Clindamycin and Lincomycin, Erythromycin and Clindamycin. Antagonism has been demonstrated between clindamycin and erythromycin in-vitro. However, very little Clindamycin is absorbed into the blood stream when given vaginally so the likelihood of drug interactions is less. No information is available on concomitant use with other intravaginal products which is not recommended.

If local irritation or allergic reaction should occur, the treatment should be discontinued.

Clotrimazole has been used in pregnant patients for over a decade without attributable adverse effects.

It is therefore recommended that Clotrimazole should be used in pregnancy only when considered necessary by the clinician.

During pregnancy, extra care should be taken when using the applicator to prevent the possibility of mechanical trauma.

Rarely, patients may experience local mild burning or irritation immediately after applying the cream. Hypersensitivity reactions may occur. There may be an increased need to urinate, low abdominal cramps may occur.

Intravaginal overdose is not possible. In the event of accidental oral ingestion, routine measures such as gastric lavage should be performed as soon as possible after ingestion.

The recommended dose is one full applicator of the intravaginally, preferably at bed time for 3 or 7 days.

Mycoten®-Plus Vaginal Tablets should be inserted deep in the vaginal with patient lying on her back with the knee bent up once daily using the applicator supplied and preferably at bed time for 3 or 7days.

Mycoten®-plus Vaginal Cream is presented as 2% Clotrimazole plus 1% Clindamycin in 35g tube.

Mycoten®-plus Vaginal Tablets is presented as 2% Clotrimazole plus 1% Clindamycin in a blister of 1 x 7’s per pack.

Store below 30OC. Protect from light and moisture. 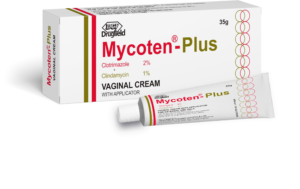